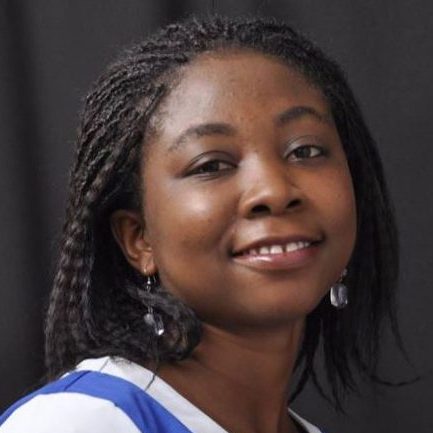 Marian hopes to develop public knowledge on toxic chemicals from unusual places, and the associated risk. She envisages policy work where scientific evidence and advisory blend to inform and shape public policy.

Marian, a senior lecturer at the Department of Chemistry at the Kwame Nkrumah University of Science and Technology (KNUST), Kumasi, teaches Practical Chemistry, Nuclear/Radiochemistry, Chemistry and Society, and Petroleum Chemistry. She has been a faculty member since January 2007.

Born in Ghana in August 1979 to Mary and Joseph Nkansah, both educationists, Marian started her basic school at St. Anthony’s Experimental School, Nkawkaw, in the Eastern Region of Ghana. Prior to university education, she majored in science at St. Roses’ Secondary School, Akwatia-Ghana, one of the most prestigious high schools for girls in Ghana. She holds a PhD in Environmental Chemistry from the University of Bergen-Norway and obtained her BSc and MSc from the Kwame Nkrumah University of Science and Technology (KNUST), Kumasi-Ghana in 2002 and 2005 respectively.

Marian’s research interests span a wide range of fields including finding solutions to environmental problems associated with levels and fate of toxic substances like heavy/trace metals, persistent organic pollutants (POPs) and polycyclic aromatic hydrocarbons (PAHs) in food, water, soil, rocks, sediments and other environmental samples and the interaction of these pollutants with each other in the environment. She has a number of peer-reviewed articles and books to her credit. Her research work in Environmental Chemistry, especially in the areas of contamination and pollution of the environment by toxic substances, has set a high standard in bringing public awareness to researchers and civil society. She serves as a reviewer to a number of local and international journals.

Marian has been on both national and international platforms where science is discussed for better public understanding. She has been involved with the Ghana Academy of Arts and Science in their high school outreach programmes. In recognition of her contribution to public understanding of science, she was featured in the first ever book on ‘African Women in Science’, a project of the Network of African Science Academies in partnership with the InterAcademy Partnership in November 2016. In June 2017, during the 67th Lindau Nobel Laureates meeting in Germany, Marian spoke with scientists like Prof. Helga Nowotny (Vice-President of the Council of Lindau Nobel Laureate Meetings) and Prof. William E. Moerner (2014 Nobel Laureate in Chemistry) on “science in the post-truth era”. The discourse echoed the need for scientists to communicate their findings in simple language to avoid discrediting science and influencing public opinion. She has also spoken at the Science Forum of South Africa (SFSA).

Marian is a member of the Global Young Academy, an affiliate of TWAS and AAS and founding member of the Ghana Young Academy.  Marian is the inaugural recipient of the TWAS F.M Al-Kharafi Prize in 2016. She was recently elected as a member of the Executive Committee of the Global Young Academy. She secured the spot of element 60 (Neodymium) on the Periodic Table of Young Chemists in commemoration of the International Year of the Periodic Table (IYPT 2019). Marian is committed to mentoring female university students, as well as striving to become a role model for young girls at the basic level of their education. She enjoys teaching and loves to share her experiences widely.