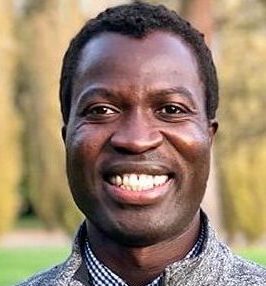 Geoffrey is planning to change the way medical research is done today by making it faster, scalable and channeled to those that need it most. He hopes to combine artificial intelligence with genetic data and scientific knowledge as a means of accelerating the discovery of fundamental principles that could enable equitable development of precision medicine.

Geoffrey was born and raised in Kenya. His work has been largely inspired by the urgent need for rapid and scalable scientific discovery as a means of solving some of the world’s biggest challenges, while creating opportunities for the society. In 2003 as an undergraduate student at Egerton University in Kenya, he taught himself how to use computers and the internet to analyze DNA sequences of the human genome and to propose a new avenue of HIV drug resistance involving virus-like sequences in the human genome. From this experience, he learned the democratizing power of the internet to empower even those living in the poorest parts of the world. He shared this experience with his fellow undergraduates at that time and thereafter committed his work to abstracting complex biological problems into a digital form so they can be solved computationally. He then proceeded to do a PhD in Biological Sciences at the University of Notre Dame, USA, and held postdoctoral positions at Dartmouth College and the University of Pennsylvania School of Medicine.

Geoffrey’s innovations combine both computational and biological procedures to address complex biological challenges including forensics where his submission in an open challenge for a method to predict the age of a person from DNA traces was selected as the top solution out of 417 submissions from teams across the world in 2014. More recently, he proposed a new method for the intrinsic biocontainment of highly pathogenic viruses which was awarded as one of the top solutions out of 182 teams in an open challenge on the Innocentive Platform in 2018. He also co-founded a DNA nanotechnology company- Helix Nanotechnologies that has received funding from various sources, including Johnson and Johnson Innovation. He has been a key proponent for the establishment of genetic databases that capture the extremely high human genetic diversity in Africa and started the United Genomes Project to address this issue.

Today, as an assistant professor at the University of Notre Dame, he has pioneered the use of natural language processing to automatically extract insights from thousands of scientific publications on gene editing technologies, resulting in the first publication to detail the global distribution of the over 10,000 researchers in this area, their institutional affiliations, the diseases they work on and the emerging biases that could impact the use of gene editing. He is also developing new ways of assessing the effectiveness and safety of gene editing technologies across individual human populations with an emphasis on Africans. In 2017, he has demonstrated a computational method for predicting drugs that could interact with gene editing technologies and therefore impact their effect on genetic diseases, such as sickle cell anemia. Before joining Notre Dame, Geoffrey was a scientist and team leader of the Data Driven Health care team at IBM Research Africa, Johannesburg, South Africa.

Geoffrey currently leads the Malaria DREAM challenge consortium that brings together several partners including the Bill and Melinda Gates Foundation, H3Africa Bioinformatics Network and Sage Bionetworks to invite data scientists worldwide to contribute computational solutions to big challenges in malaria. He also believes that medical research needs to lower the barriers of entry into the field by people with diverse perspectives. He has taken several steps to address this issue, including previously developing Fit2Cure, a game that allows ordinary humans to solve shape-fitting problems that are important in drug discovery and by providing hands-on computational experiences to young scientists in Africa through hackathons designed to solve specific biomedical problems with real-world datasets. Geoffrey is the recipient of several awards including IBM Faculty Award (2019), Quartz Africa Innovator (2017), Young African Committed to Excellence (2016), TED Fellow (2014).