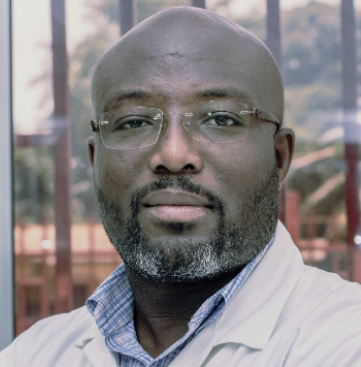 Einstein Challenge: Alpha hopes to highlight the reservoirs of viruses and better understand the natural history of Ebola virus infection in order to better anticipate, differentiate and prevent epidemics, from Africa to the world.

Born in Conakry, Guinea, Alpha grew up in an environment where medical sciences were omnipresent. Imbued with great curiosity very early in life, he began to ask himself questions about the origins of human disease. In high school, he focused on experimental sciences until he obtained his baccalaureate at the “Lycée du Groupe Scolaire Victor HUGO” in Conakry, Guinea.

With his baccalaureate in the sciences, he joined Gamal Abdel Nasser University in Conakry (UGANC) where he spent one year at the Faculty of Sciences in “Biomedical Sciences” and then began medical studies at the Faculty of Medicine, Pharmacy and Odontostomatology. In parallel with his medical studies, he completed a Master’s degree in Statistics applied to biomedical sciences at the UGANC.

He went on to study in France where he was sponsored by Infectiopole Sud grant for a Master’s and then continue with a PhD in Infectious Disease and Microbiology and Epidemiology at the Aix-Marseille University, France. During this period, he worked at the Emerging Tropical Infectious Disease Research Unit (URMITE) where his challenges were to elucidate how this bacterium is transmitted to humans and to identify its natural reservoir. His contribution made it possible to propose a coherent natural history for the bacterium, to show that T. whipplei is a frequent bacterium that is contracted very early during childhood, to identify humans as the only known reservoir and to suggest that the transmission of the bacterium would be interhuman, depending on hygiene conditions.

During his postdoctoral position at the IRD (or Institut de Recherche pour le Développement) in Dakar (Senegal) within the UMR 198-URMITE, Alpha was involved in malaria research and the study of the causes of non-malarial fever. Firstly, he led the introduction of real-time PCR species diagnosis of malaria at the Dielmo research station (280 km from Dakar, Senegal). The diagnostic procedure has strengthened microscopy and rapid diagnostic tests (RDTs), as cases of malaria with very low parasitemia were more easily diagnosed. In addition, he led the implementation in Guinea (specifically in the Kindia and the Maferinyah) of the study on the causes of non-malarial fever. Several missions were necessary to successfully implement the study, which was partly supported by “Fondation Mérieux”.

With the Ebola outbreak in Guinea (2013-2016), Alpha began redirecting his research interests towards the Ebola virus. He was involved after ad hoc training on laboratory working conditions for the diagnosis of Ebola virus disease at the Ebola Treatment Centre (ETC) in Macenta in the Guinea Forest region. He joined the “EPRUS” (Établissement de préparation aux urgences sanitaire) as a microbiologist. He was in charge of the laboratory set up in the Ebola Treatment Centre (ETC) by the Pasteur Institute in the city of Macenta (704 km from Conakry). The laboratory was the only diagnostic Centre in the region. It covered 10 provinces, including Macenta, Guékedougou, Kissidougou, Nzérékoré, Lola, Yomou, Faranah, Siguiri, Kankan, Kérouané. This experience has allowed him to be at the forefront of the fight against the Ebola virus disease in the Guinea.

Under the supervision of Prof. Eric Delaporte and Dr. Martine Peeters, Alpha was initially recruited as a Post-Doctoral Fellow at IRD and assigned to the TransVIHMI Unit for 2 years. Thanks to this postdoctoral contract, he was able to develop a global research project “ONE HEALTH” in Guinea on the study of the Ebola virus at the human-wildlife interface. The objective is to document the presence of Ebola virus at the interface of animals and humans in the Guinea in order to assess the risk of transmission of Ebola virus to humans and to understand the mechanism of virus circulation.

To carry out his work in the Guinea successfully, Alpha set up a Molecular Virology Laboratory at the National Institute of Public Health in the country. With his colleagues, they created the Centre for Research and Training on Infections disease in the Guinea where he currently manages the laboratories.

Alpha is a board-certified physician of the Guinean Medical Council. He has authored over 40 scientific articles in the field of infectious diseases, and he is an ad-hoc reviewer for several international peer-reviewed journals. Besides research, Alpha is involved in teaching at the University of Conakry. He is a member of the scientific committee of the Faculty of Health Sciences and Technology of Gamal Abdel Nasser University of Conakry (UGANC) and Academic Secretary of the Inter-University Diploma in Global Health of UGANC-University of Montpellier. He is also Research Officer of CAMES (African and Malagasy Council for Higher Education), on behalf of the University of Gamal Abdel Nasser in Conakry.

Alpha is a recipient of several awards, including the Bronze Medal of the Mediterranean Infection Foundation obtained in 2012 in Marseille. He served as a NEF Ambassador for Guinea.