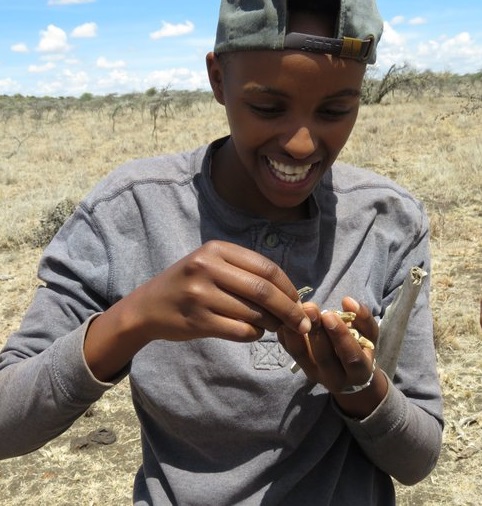 Next Einstein Forum: Tell us about yourself and why you chose your current area of work and research?

Ivy Ng’iru: My earliest memories revolve around wildlife. My father, a farmer, would take me to the fields with him and teach me about the many birds, insects and mesofauna we would encounter in the plains of Ethi in Meru country, Kenya. When I was ten, my mother bought a book with the title, “the Alien” by Anthony Mwangi. It narrates the story of a young boy, who was a science prodigy. At a tender age, he was able to heal wounds, create rain and finally, use electromagnetism to keep the streets safe. I quote,” A comic book that makes science fun! Very good for teaching how science works, and encouraging young scientists.” This book rooted me in science.  Interestingly, my career begun in environmental education up until I met Dr. Dino J. Martins. The nature of his work, more specifically the evolution and ecology of interactions between insects and plants, allowed me to appreciate science in a way that I hadn’t before. It allowed me to view insects as interesting units of nature that may appear relatively small, but are stable and hold a lot of secrets to an observant eye.  His work has enabled me to appreciate the benefits that insects serve to mankind, especially through pollination and nutrient cycling.  Highlighting how farmers are focal in the conservation of biodiversity, I felt quite at home with the appreciated fact that for conservation to be achieved. It needs a collaborative approach from all societal sectors

You are currently working at the Mpala Research Center. Could you share with us what does your job look like?

Y.N.: I specifically work in the Insect-plant interaction lab, founded and Led by Dr. Dino J. Martins. My current projects focus on two major fields of insect-plant ecology, namely Invasive species and Insect Genetics. For Invasive species Ecology, we study two species of grasses- Buffel grass (Cenchrus ciliaris) and Guinea Grass (Megathyrsus maximus). We measure their functional traits, study their associated insect communities as well as fungal communities. For insect genetics, we use butterflies as our model species. We study the African queen butterfly (Danaus dorippus / Danaus chrysippus), Diadem butterfly (Hypolimnas missipus), which we breed and capture wild immigrants. In the same vein, we collect Larvae, pupa and adults of the Painted Lady butterfly (Vanessa cardui) as part of the Worldwide painted lady migration project.  Protocol development and data analysis are also part of the duties I undertake in the lab. Every once in a while, I get the chance to give guided talks to students, on the various aspects of insect-plant interaction that we tackle in the lab.

Besides COVID-19, Africa is currently facing a locust swarm. Could you briefly explain what this crisis is?

Y.N.: The current locust in play is the desert locust (Schistocerca gregaria). It normally is solitary and localized, but when environmental conditions are not favorable, it shifts into the gregarious state, aggregating to about 150 million individuals per square kilometer. The swarms then migrate from their local area to new lands causing devastating effects to vegetation wherever they stop to feed.

According to the World Bank, this year’s outbreak is the biggest outbreak faced by some countries in decades. Why?

Y.N.: There has been a phenomenon. The Indian ocean dipole, which has resulted to heavy downpour in Eastern Africa. This can be accredited to climate change. The heavy downpour caused an unusual increase in vegetation productivity. The availability of food, moisture and warmth have resulted to the successful invasion, survival and reproduction of the locust swarm, whose origin was the Arabian Peninsula.

What could be the consequences of this crisis? What makes this swarm so damaging to agriculture?

Y.N.: Decreased crop yield! Africa is already food insecure. The potential of agricultural output remains unattained, with the major limiting factors being inadequate water and nutrients. The heavy rainfall has resulted to flooding in certain parts of the country threatening the expected agricultural yield. Locusts, which feed on foliage and tender plants tissues have been shown in studies, to feed an equivalent of their body weight in fresh food per day. Considering that a swarm may contain up to 150 million individuals, the impact of their feeding behavior is huge!  This, further, results to a decrease in agricultural crop yield, especially if the attacked plant is unable to tolerate the impacts of herbivory.

What are African countries doing or could do better to address this issue?

Y.N.: There are already existing challenges that prevent African countries from effectively controlling Locust swarm pandemics. We however need to appreciate the already existing efforts by bodies such as Food Agricultural organization (FAO), Intergovernmental Organization on Development (IGAD), World meteorological organization (WMO) among others in the monitoring and control of these swarms.  Studies on the potential impacts of climate change in Sub-Saharan Africa, predict an increase in precipitation as currently being observed in Eastern Africa. This could mean that such eruptions may be frequent and intense becoming the major challenge that needs to be considered, in the improvement of control and monitoring measures.

How can they best prepare to address future locust outbreaks?

Y.N.: African countries, should work together having in mind, that this is a trans-boundary problem. They should also invite to the table, countries in the Arabian Peninsula as well as other global regions that are affected by the swarms. Supporting trans-national control institutions, should be very pivotal within preparation measures. Resources for locust monitoring, and control should be improved, and wherever possible, fabricated according to regional needs. This allows for a strengthened approach, increasing possibilities of a successful control practice.  Building both local and regional capacity within each area prone to these attacks, will go a long way in aiding monitoring of swarms and potential egg-laying areas. It would make it easier to control emerging generations thus shield crop loss. Finally, I strongly believe that the further away we move from the utilization of agro-chemicals, the healthier the systems will be. This can be achieved through the development and utilization of biological controls.