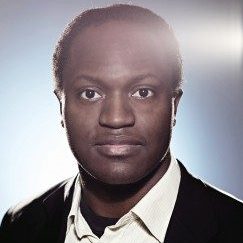 Axel hopes to create efficient approaches for the time efficient processing of Big Data at low cost that will facilitate the development of intuitive information systems for domains such as bio­medicine, agriculture and education.

Axel Ngonga was born in Bafoussam, Cameroon to an engineer and a mathematics teacher. He began displaying an interest in science at an early age, earning him the title “Mister Why.” This interest was furthered by his parents, who provided him with literature to fields as diverse as astrophysics and chemistry. However, it was computer science that he chose to study after completing his A-levels and baccalauréat in Buea, Cameroon.

Axel completed his Doctorate degree in computer science at the University of Leipzig in 2009. His main area of research is semantic web technologies, which aim to facilitate the development of intelligent data-driven approaches to support humans as they perform complex tasks as diverse as learning new subjects, analyzing large volumes of data or even surgery.

His vision is to develop intelligent applications that will bridge humans and large amounts of data. The resulting techniques allows support the development of intuitive information systems for bio-medicine, agriculture and education that can provide contextually relevant information at low cost, thus fostering an equal-opportunity data landscape for Africa.

Axel has been honoured with best research paper awards at top-tier conferences such as the Extended Semantic Web Conference 2014 and 2013 and the International Semantic Web Conference 2011 and 2014. He has more than 100 peer-reviewed publications that have been cited more than 1,000 times. He currently leads research projects on big data processing and search in large-scale data.

Beyond being a researcher, Axel is a passionate bass guitar and chess player.