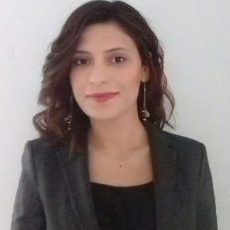 Radhia Bezzine is a trained engineer working as a data-scientist for “Business and Decision” company. She graduated from ECOLE NATIONALE D’ELECTRONIQUE ET DES TÉLÉCOMMUNICATION DE SFAX genie, an engineering school. Before that, she specialized in Mathematics and physics at the ECOLE PRÉPARATOIRE AUX ETUDES D’INGÉNIEURS DE NABEUL

Since 2005, Radhia has been an active Tunisian at the International scale. In 2008, she represented the youth of Tunisia, as well as the parliament of young Arabs. A few months later, she joined the youth network of the United Nations and The Organisation Internationale de la Francophonie where she worked on various projects in political science, social physics, networking, climate change and big data. She played an outstanding role within her community, allowing her to represent her country at events organized under the patronage of the United Nations.

Endowed as a data scientist, Radhia is piloting a project for the regulation of the impact of social networks on the youth to promote a culture of humanism, democracy and fundamental values.