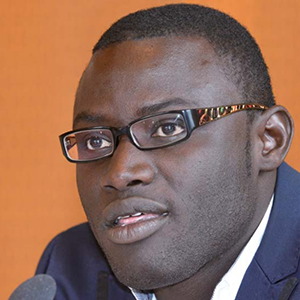 Moustapha hopes to understand the interplay between non-local geometry and relativistic quantum mechanisms (RQM). Of equal importance, he wants to make mathematics accessible to both the educated and illiterate in Africa by demonstrating the practical applicability of mathematics and benefits of optimization.

Mouhamed Moustapha Fall was born Keur Samba Kane, a little village two and half hours from Dakar. Although he was the first in his family to attend university, his father pushed him to go to school. Moustapha also believes that his good primary and high school teachers are the reason he became passionate about computations and technology at a young age.

Moustapha graduated from Université Gaston Berger in Saint-Louis, Senegal, in 2004. As the top graduating student that year, he was selected for the diploma program in mathematics at the Abdus Salam International Centre for Theoretical Physics (ICTP) in Trieste, Italy. In Trieste, he also passed the very competitive and prestigious International School for Advanced Studies (ISAS/SISSA) entrance examination in 2006 and started his PhD under the supervision of Professor Andrea Malchiodi in the field of geometric analysis.

After defending his PhD in 2009, he was an assistant at the Université catholique de Louvain in Louvain-La-Neuve in Belgium from 2009-2010. In 2010, he became a Humboldt Postdoctoral Research Fellow at the Goethe-Universität Frankfurt followed by a postdoctoral position at the Università degli Studi di Milano-Bicocca.