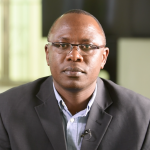 Justus hopes to develop functional electrochemical energy storage and conversion systems coupled to renewable energy sources for mini-grid and off-grid applications and to develop efficient systems to convert CO2 right at its source of generation into hydrocarbon fuels and commodity chemicals.

Justus Masa grew up in Buginyanya, located at an altitude of 2044 meters on the highlands of Mount Elgon, in Uganda. The challenges imposed on life by this geography naturally helped Justus seek to improve livelihoods in his community and beyond. He figured out rather early, with the strong influence of his parents, especially his mother, that only science, engineering and technology could offer the solutions to most of these challenges. Justus joined Makerere University with a state scholarship to study Physics, Mathematics and Chemistry. He came second in the National Mathematics contest in 2001, and 5th in 2002. Afraid of being unemployed due to the under-appreciation of fundamental sciences, he majored in Industrial Chemistry. In 2003, he joined the Fish Oil sub-project in the framework of the Norwegian Programme for Development, Research and Education (NUFU) support to Makerere University. He received a prize for demonstrating the extraction of omega-3 rich oils, which have potential pharmaceutical applications. In 2005, he won a scholarship from the Germany Academic Exchange Service (DAAD) to support his Master in Science in Chemistry at Makerere University, followed by a Research Fellowship in 2006 at Ruhr-University Bochum. Following this, Justus earned a doctorate, with a distinction (summa cum laude), in Natural Sciences (Dr. rer. nat) from Ruhr-University Bochum in 2012.

After this, he became a visiting scholar in the Physical and Theoretical Chemistry Laboratory at the University of Oxford in 2013, where he worked on harmonizing mismatch between experimental and theoretical kinetic data of nanoparticle-modified electrodes in hydrodynamic voltammetry. He returned to Ruhr-University Bochum as a Senior Research Scientist and Group Leader of the Electrocatalysis and Energy Conversion Group at the Center for Electrochemical Sciences (CES) in the Department of Analytical Chemistry. He is a co-inventor of four patents, three of which won the prize for the best innovations at Ruhr-University Bochum. Justus has also been a Lecturer at Kyambogo University since 2013.

Justus’ research aims to use electrochemistry to create green and sustainable energy systems for both portable and grid-scale energy conversion and storage, particularly, the reversible interconversion of water into hydrogen and oxygen in a solar powered water electrolyzer, and the recombination of hydrogen and oxygen to water in a fuel cell thereby harnessing the energy of the reaction. The ultimate goal is to couple harnessing of intermittent energy systems with advanced electrochemical energy storage and conversion systems, to improve the overall efficiency of the energy tapped from renewable sources. To this end, Justus leads several research projects in the field of electrocatalysis and energy conversion, focused on the development of advanced low-cost catalysts and electrode materials for electrochemical energy systems, including fuel cells, electrolyzers (power to gas energy conversion), rechargeable metal-air
batteries and other modern battery systems.

Justus is a member of the International Society of Electrochemistry (ISE) and has published more than 70 peer-reviewed papers and 2 book chapters. In 2015, he was appointed as the Head of the Salt Cluster, Technical Working Group (TWG) on Mineral Value Additional, of the Presidential Investors Round Table (PIRT V), which is chaired by HE President Yoweri Museveni. He is also a Fellow of the African Good Governance Network (AGGN), which is comprised of highly educated African academics who are dedicated to good governance principles.