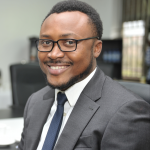 Tolulope hopes to use new advances in computational geophysics, statistics and high-performance computing to image Africa’s continental interior in 3-dimensions, enabling the global earth science community to better understand earthquake hazards, history, and drivers of plate tectonics, and the composition and evolution of the ancient continental core of Africa. To make this possible, Tolulope hopes to obtain an infrastructure grant to build and operate a truly continent-wide, state-of-the-art, geophysical observatory owned and operated by world-class African scientists.

Tolulope was born in Lagos, Nigeria. He derived his primary inspiration and initial scientific training from his mother, a civil engineer, who has devoted her entire life to teaching science, mathematics, physics, and technology to high school students in Nigeria. Tolulope counts himself one of her success stories. Regarding his education, Tolulope obtained a Bachelor of Science in Computer Science and Engineering from the Obafemi Awolowo University, Ile Ife in Nigeria. Here he gained early exposure to the mathematical and computational sciences, e.g., Physics, Chemistry, Engineering Analysis, Artificial Intelligence and Numerical Computation. As a result of this broad exposure, he decided to pursue a research career in exploration geophysics because it allowed him to retain a broad interdisciplinary interest, while creatively studying the most complex and exciting physical system- the Earth.

Tolulope then applied for, and was selected to, a competitive and fully funded doctoral graduate fellowship to study Geophysics at Yale. He completed his PhD in 2014. As a Postdoctoral Research Associate at the University of Maryland, he has gone on to study the Earth using geophysics, seismology and computational statistics as his primary tools of investigation. Tolulope’s research aims at improving the understanding of the architecture and composition of the solid Earth interior – in particular, the structure of continents and the cause of the transition from stable to weak behavior in the rocks that make up the outer exterior of our planet, which is what allows plate tectonics to operate. To do this, he builds sophisticated computer models and designs novel remote sub-surface imaging techniques. In simple terms, seismologists like Tolulope ‘see’ into the interior of the planet, by developing the ‘brains (computational algorithms)’ to
translate the data from Earth’s many sources of vibrations (e.g., earthquakes, ocean waves, ice-quakes, etc.) into images of the interior of the Earth.

He believes, like the NEF, that the next Einstein can come from Africa and that is why he applied for the NEF Fellowship. In his experience, it is impossible to achieve real global leadership, independence, and recognition in the area of scientific research without a robust and rigorous foundation in Science, Technology, Engineering and Mathematics (STEM). Tolulope was a recipient of the Fred Earl Ingerson Fellowship, which supported his doctoral education at Yale University. He is a member of the American
Geophysical Union, with leadership experience in convening scientific sessions. He is passionate about promoting earth science amongst high school students and the general public. Most recently, he has been doing this as one of the Nifty-Fifty (times 4) speakers nominated by the USA Science and Engineering Festival in the DC, Maryland, and Virginia areas. The ‘Nifty Fifty (times 4)’ is a program of Science Spark, a group of 200 noted Science and Engineering Professionals who fan out across the country to speak about their work and careers at various middle and high schools.

As of July 2018, Tolulope will be taking up an Assistant Professorship in the Department of Earth and Environmental Sciences at University of Rochester.