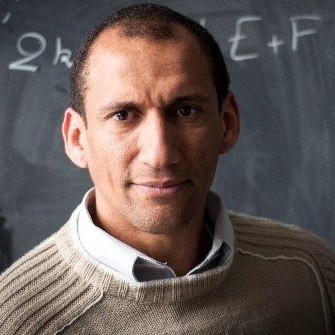 Joseph hopes to determine how the generic features of the quantum models that he is investigating are helpful for describing the birth of our spacetime and universe.

Joseph Ben Geloun was born in Saint-Louis, Senegal. He has always been fascinated with how mathematics can solve precise problems which is probably why he pursued a career in mathematics.

He earned an undergraduate degree in pure maths at the Universite des Sciences et Techniques de Masuku, Masuku, Gabon and an MSc at the Universite Cheikh Anta Diop, Senegal. At the PhD level, Joseph specialised in mathematical physics in Benin.

Joseph’s area of research is quantum properties of matter. Today, we understand the atomic model structure, meaning what is inside the atom (nucleus, neutrons and protons, and the elementary particles inside them called quarks). This is only one part of the story. Physics happens in spacetime. Today, there is a large consensus among physicists, saying that, at very small distances, much smaller than the parts of an atom, the geometry of our spacetime are no longer in the form observed around us. Thus, this predicts that Albert Einstein’s laws fail at this very tiny scale. Building models consistent with this quantum understanding using mathematical scenarios is the focus of Joseph’s research.
For his “pioneering work on Renormalization on Tensor Field Theory and the discovery of their generic asymptotic freedom”, he was been awarded a Young Scientist Prize in Mathematical Physics 2015-2017 by the International Union of Pure and Applied Physics (Switzerland). Joseph is currently holder of the Alexander von Humboldt Experienced Research Fellowship, in Potsdam, Germany.