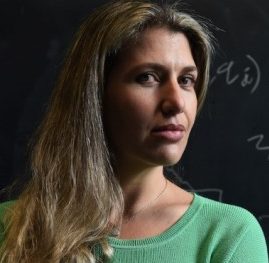 Amanda hopes to develop a fundamental theory to explain dark energy and the cosmological constant, Einstein’s so-called fudge factor, that appears to be causing the accelerated expansion of our universe.

Amanda Weltman was born in Cape Cod, Massachusetts in the USA and came to South Africa when her family moved home when she was 2 months old. Raised in Johannesburg and Cape Town, South Africa, she was always surrounded by books, in a family who treasured learning and mathematics above all else. As a child she was a competitive gymnast and passionate about art, reading, sports and science.

In retrospect she realises that learning to balance her intellectual side with an artistic and athletic side has laid a solid foundation for her in how to balance the complex realities of parenting, science and leadership.

After a distinguished undergraduate career at the University of Cape Town, she pursued her graduate education at Columbia University in the US. She completed her PhD under the supervision of eminent string theorist Brian Greene in 2007 and joined the faculty at the University of Cape Town taking up a postdoctoral position at the prestigious Centre for Theoretical Cosmology in the Department of Applied Mathematics and Theoretical Physics at Cambridge University in the UK that same year.

After almost a decade abroad, her devotion to South Africa brought her back to South Africa in 2009. She believes deeply in the importance of science and mathematics education as the cornerstones to a knowledge economy and has committed substantial resources to being a part of building South Africa’s bright future.

Amanda’s love of solving problems has led her to the playground of the universe, theoretical physics. She is most well-known for proposing the Chameleon field – a particle that could be responsible for causing the observed accelerated expansion of the universe while also causing interesting and unexpected local and solar system physics effects that could be observed in purpose built experiments.

Her work has created new research subfields in cosmology and experimental physics. Her current research focus is on explaining and observing the two greatest unknown components of our universe, Dark Energy and Dark Matter. She is also trying to understand the nature of time, and whether the universe had a beginning and how it will end.

Amanda has won a number of awards for her research including the National Women in Science award for the Best Emerging Young Researcher in the Natural Sciences and Engineering, the Meiring Naude Medal from the Royal Society of South Africa, the NSTF-BHP Billiton, TW Kambule Award To an Emerging Researcher for an outstanding contribution to SETI through Research and its Outputs, and the Silver Jubilee medal from the South African Institute of Physics.

Currently, Amanda is an Associate Professor at the University of Cape Town and together with her work, have been profiled broadly in popular science media, including two cover features in New Scientist and a profile in Nature. Amanda holds a Presidential rating from the NRF and is the NRF/DST South African Research Chair in Physical Cosmology, the first woman in South Africa to hold a research chair in the mathematical or physical sciences.

In addition to her scholarly work, she is passionate about education and engagement in these fields, especially for women in STEM. From very early on in her career, she has devoted herself to promoting science education, through several initiatives including the Physics Emasondosondo programme where she was in the pioneering group in 2001, repeated involvement in Girls Science Day at Columbia University, and most recently in her involvement in the South African Young Academy of Sciences (SAYAS) for which she served as an elected member of the executive for 2014/2015. In 2015, she was involved in founding the multiblogger, multilingual mathematics blog Mathemafrica.org, and she is working with the NYAS on the Clinton Global Initiative, “1000 Girls, 1000 Futures”.